“Our jobs as marketers are to understand how the customer wants to buy and help them do so.” – Bryan Eisenberg 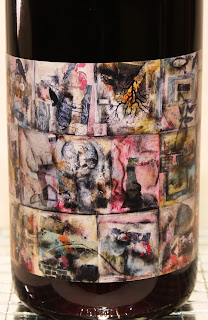 I’M NOT A FAN OF THE LABEL.  The style is intended to grab your attention.  But it too will soon get lost among the growing number of labels with paintings of distorted faces on wine bottles.  Then perhaps L.E.D. type sparklers will be attached to wine bottles. Sensitivity pads in the floor of the retail store can remotely set them ablaze as you walk by.  And like some greeting cards, songs can be played from each bottle as you open it.  Eventually, labeling will again welcome useful information and an identity. But in the meantime, you’ll need to often look to the back label if you want to know what’s inside the bottle and who made the wine.

This 2016 “Young Carignan” from Coturri Winery is a case in point. Grapes are from Mendocino County.  The winery is in Glen Ellen (Sonoma County).  The wine is not fined or filtered and is organic.  The alcohol is 14.2%.  It is intended to be consumed young and that is why (they say) the bottle is intentionally clear (though when filled with the dark purple juice, you likely wouldn’t notice that).  All that is on the back label.  But had some useful information (Winery, Varietal, AVA and Vintage) been on the front label, other information could have been on the back that is important to a passionate segment of the market.

For example, the vineyard is CERTIFIED organic.  The Coturri winery has never used grapes treated with pesticides, fungicides or herbicides. This is not something new for them (they’ve been doing it this way since 1961). It is also dry farmed with the initial rootstock never irrigated.  Grapes are harvested by hand. The wine has no added sulphites and only indigenous yeasts are used.  In short, this is natural wine.  And while that’s appealing today to a segment of the market, it’s just the way Coturri has always been making wine.  For that niche of wine consumers, or that segment having read about “natural wine” and wanting to try it, I suggest Coturri and others consider appealing to their “natural” market instead of imitating the graphic art front label concept used by bigger players with bigger budgets.  It would seem a better use of limited label space; certainly more efficient than the consequence of not promoting it to that group of consumers who specifically shop for these wines. 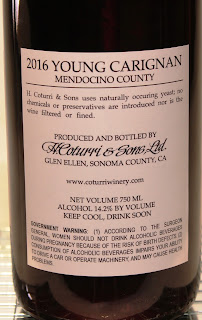 Besides, Coturri doesn’t just produce Young Carignan.  The winery also produces and bottles Pinot Noir, a Rose, Syrah, Zinfandel and others.   Each varietal opens an opportunity to a market segment. So the young man wearing a belt made from hemp fiber but who doesn’t like Carignan and likes instead …….. well, you get the idea.

So, after this, what’s my impression of natural wine – or at least this one?  Key to an understanding is that all wine will have sulphites.  That’s natural too.  But natural wine will not have any added sulphites.  And while there’s another segment of the wine market that has bought into sulphites being the worst of evils, understand that sulphites are also a preservative against bacteria and microbial infection.  Yes, wine has been made for thousands of years without adding sulphites.  But, as a rule, I would suggest that all natural wines be consumed young.  People have been getting sick for thousands of years too.

That said, this “Young Carignane” is 91% Carignane, 5% Syrah and 4% Zinfandel.  All these black grapes make for serious red wine, with Carignan noted for being high in acid, tannin and bitterness while also being rife with problems on the vine like powdery and downy mildew.  It’s also prone to rot and infestation by grape worms and seems a varietal that was blessed by the agrochemical industry.  Yet, when handled correctly (meaning just right) Carignan has its charm.  Coturri uses only two and three year old barrels and bottles their “Young Carignan” just three months after fermentation.  Picking fruit at exactly the correct moment is critical and Coturri, which dry farms and head prunes their vines, seems to know when that moment arrives.

In the glass, this wine shows as dark purple. Initially, it displays

a rustic edge showing acidity and tannic structure.  Aired, however, it softens and opens with blackberry, licorice and cassis on the nose with a note of forest floor.  It has a creamy, velvet-like texture with black and blueberry on the palate.  Tannin, though controlled, is evidenced by a slight drying sensation behind the upper row of your teeth.  Vacuum pumped, capped and saved for the next day, the “forest floor” becomes more like fresh white mushroom and the nose takes on aroma of brandied berry fruit.  Texture is syrupy rich with blackberry and some heat remains on the finish.

Carignan was once so widely planted in Languedoc-Roussillon that it was France’s most widely planted (red wine) grape for much of the last century.  As Syrah is different than Shiraz and Bordeaux Blends are different too than Meritage produced in the U.S., and a Cahors (Malbec) is different than Malbec from Argentina, so too is  this “Young Carignan” from Coturri & Sons (despite that in the U.S. we have adopted the more common spelling of Carignane).  I won’t even get into Pinot Grigio and Pinot Gris.  But I will get into this bottle offering charm and value, particularly if you have not enjoyed this grape or it being presented in this style.

Consider pairing this with marinated venison or stew, a rack of lamb with baby eggplant and onion in roasted tomatoes, duck or goose with a sausage stuffing or beef brisket.