“We are born at a given moment, in a given place and, like vintage years of wine, we have the qualities of the year and of the season of which we are born”…..   Carl Jung 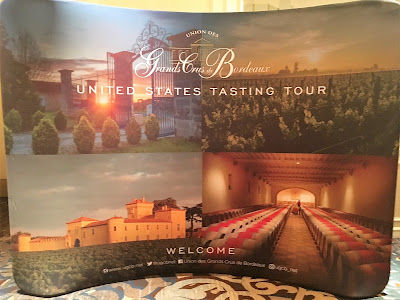 If you regularly buy or enjoy Chateau Petrus, Margaux or Lafite-Rothschild for daily enjoyment, odds are you’re not following Wine Mizer anyway. But if you enjoy Bordeaux wine – or want to try some and are more like the average consumer - today’s post is for you.  At the Union des Grands Crus de Bordeaux tasting in Chicago on January 23, I relished tasting the white, red and sweet wines from the 2015 vintage. These were actually barrel samplings that were bottled for the trade show. I still have a few 2005, 2009 and 2010 aging and am always impressed with how they have developed over the years. Even the 2004 that I bought as “futures” redeemed itself with time in the bottle.

What particularly struck me about the 2015 vintage is how drinkable the wines are now. Sample after sample, right bank (Merlot dominated) or left (Cab dominated), fruit dominated both the tannins and acidity. If you don’t have a cellar or the interest to age wines, this is important. Even better, I think 2015 will be regarded as the best vintage since 2009-2010 so it should be regarded as an opportunity to either stock up on the vintage or to try tasting Bordeaux wine and learning why it is considered the benchmark of blends. Wine Spectator in their June issue

Sauternes 94-97. Finishing with the sweet, botrytized whites of Barsac & Sauternes

at the tasting, what so often appeared – almost s a theme throughout the region - was

a freshness in the wine’s finish and mouthfeel: light notes lifting the mouthfeel of a

Despite the somewhat fruit forward nature of this vintage, the reds have more structure than 2007 and should cellar well, giving the vintage a benefit to both the experienced appreciator of Bordeaux wines and those newly introduced.