“The best wine is that which tastes good to thine own palette.”  … Pliny the Elder.

Respecting that all palates are personal, I don’t have wine “rules,” though I admit to having “preferences”.  One of them is to generally avoid domestically produced red wines priced under $15. (And yes, there are some exceptions.  And good whites are available under $15, but those again are whites. And bargains can be found in “old world” red wines). That aside, and with my personal preference stated, when I saw this bottle of (2014) “Angel’s Landing Napa” Cabernet Sauvignon for sale retailing at $11.99, I was cautious.  With Napa Cabernet Sauvignon grapes averaging $5,930 per ton in 2014, one should be cautious approaching a bottle priced at $12. 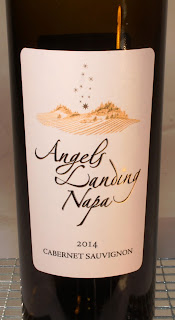 Angel’s Landing is a label represented by the Mendocino Wine Company which represents many brands.  Call it “grey” or “white” labeling, I’ll even concede in advance that the issue essentially comes down to what’s inside the bottle. Yet with such “white labeling”, it’s difficult to learn about that.  And for those who want to confirm why their senses are telling them what they think they are, it’s this lack of transparency that is troubling.  One cannot get the tech specs.  Is the wine blended with other varieties?  (Wines labeled a varietal in the U.S. may contain up to 25% other grapes). What’s the residual sugar?  How was the wine made?  Who actually made it? How much oak, what type, how long was it aged?   Most wines so labeled don’t have web sites and seldom are professionally reviewed.  Information develops knowledge and appreciation and – most important - understanding.  And for some of us, that’s essential to a good experience.

In this case, the fruit is indeed Napa, mostly from the Yountville area vineyards known for Chateau Montelena.  In fact, Grgich Hills‘ Mike Grgich (formally of Chateau Montelena) was responsible for bringing Chateau Montelena to the world’s stage in the Paris Wine trials of 1976.  Dominus, Domaine Chandon, Charles Krug and others also are in Yountville. Its pedigree is established.   But appellation alone does not guarantee anything other than locale. And Yountville is not identified on the label.  …………….. And the back label refers only to “Napa County.”

So regarding Angel’s Landing, I think I need to respect Pliny the Elder’s foresight.  The wine is deep purple in the glass. The nose, for me, is all blackberry jam with some crème de cassis and a hint of black licorice.  The mouthfeel is liquid silk. While Cabernet Sauvignon is noted for tannins, I found them so rounded, with almost no grip, that I resented not being able to access more information. The palate revealed a reduction of blackberry sauce with blackberry preserves dominating the back taste. Upfront was some Christmas spice.  A note of green pepper is common in Cabernet Sauvignon, but I often miss that as I did again with Angels Landing. Others report sage and iodine (I did not). Another described the wine as masculine.  Though not comfortable today with such terms, I’d describe it as more feminine because I found the wine somewhat sweet and, as I said, the tannins were so soft as to be almost nonexistent.

For the price, I’d have to say this Cab offers value if you’re looking for an easy drinking red wine that’s likely to be a crowd pleaser.  I later discovered its ARP is actually $22 (the price of $11.99 having been a “close out” sale price).  For my palate, I found the wine somewhat sweet. But for those finding Cabernet Sauvignon generally too tannic, too dry, this could be the bottle they’ve been waiting for.