“All palates are personal and correct for the people owning them.” …. James McMillan
“Tasting notes are as personal as a Selective Service Induction Notice.” … James McMillan 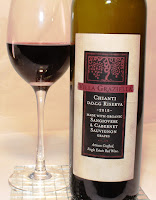 The quotes above should be a good clue as to what I think of tasting notes. But perhaps I can add some value in your search for wines to pair with food, because “therein lies all the difference.” While, in the minds of many, Chianti is “birds of a feather”, it is not so.  For those who have read my recent post about Villa Graziella, you know that Villa Graziella is a 12th generation farm and has been certified organic since 1979.  If you haven’t read that post, may I suggest you go back to it to see a review of Villa Graziella’s 2018 “Rosso Toscano” where those details are disclosed more fully?   https://www.winemizer.net/2019/07/villa-graziella-rosso-toscano-igt-2018.html 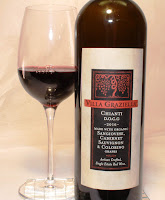 Let’s here deal instead with differences in Italian  regulations regarding use of the term “Riserva”. In the U.S., the term “Reserve” is unattached to any legal definition or standard of adherence.  Throughout my travels in the U.S., “Reserva” or “Reserve” may mean a wine that was longer aged. It may mean a wine made from their best grapes, or a larger portion of the grapes being from their best vineyard.  It might mean longer aging or even their best barrels being used. In every winery I visited, it did mean something, but what?  Well, that was up to the winery. Point being, it is not legally defined in the U.S.

In Italy. It means aging.

Whether that is good or bad is up to you.  Personally, I think it’s good because, as a consumer, you’re better prepared to expect what to taste when you do taste the bottle’s contents and that, ultimately, is the why and how of wine becomes and remains personal to your palate.  But there needs to be a second caveat before we progress.  Current releases of these two wines are from different vintages and it will always be so because of the requirements needed to meet Riserva labeling. Current releases of Villa Graziella’s Chianti DOCG are from its 2017 vintage while their Riserva is from the 2015 vintage. 2015 was rated 95 (as a vintage year) by Wine Spectator.  2017 remains, as yet, unrated).  Yes, Virginia, “old world” wines are looked at differently.

One of the ways these wines are looked at differently is how they pair with food. This is not just common with “old world” reds but “old world” whites also. Today, lets just look at these two reds because, especially with “old world” Italian wine, it’s all about acidity and food.
CHIANTI DOCG 2017
I tasted each of these wines over three days (wines being vacuumed pumped and cool stored). On the nose: Cherry, black plum, raspberry; a note of freshly sliced green bell pepper.  It held up remarkably well through day two and three and by the third day offered a slight note of tomato leaf.  Tart cherry was dominant on the palate. Overall, this non-reserva was zippier and brighter than the Riserva (think Crianza, Reserva & Gran Reserva as with Spanish wines) and offered bright notes of raspberry and allspice.  In the glass, it displayed a very thin watery rim on its edge (compared to the riserva, which had no such rim). By the second day, I enjoyed some dried black plum on the finish and, on the third, notes of black olive.

You don’t need food pairing suggestions from me: Your taste buds already are craving barbecue ribs, roast chicken with rosemary, roasted vegetables made on the grill, and – of course – pizza and pasta with red sauce.  But also, so much more – let your imagination swirl and enjoy (or learn from) the experience.

To appreciate the difference aging makes, let’s start with the DOCG Chianti. The juice from the Sangiovese spends five months in temperature controlled stainless steel tanks, then four months in 1,000-liter French oak barrels.  The Cab and Colorino are aged in new French oak barriques for nine months. The three varietals are then blended and finished in stainless for two additional months.  The steel, at cool temperature, preserves freshness and aromatics. The oak adds, of course, some tannins but also smooths all the notes together through the “angel’s share” and helps balance all the components.

Contrast that against the 2015 CHIANTI RESERVA
The Sangiovese begins with six months in steel and then another 18 months in French oak. The Cabernet is kept aside awaiting blending by spending two years in French oak and then, after being blended, spends another three months in barrel married to the Sangiovese. Reserva wines, under Italian law, require a minimum of two years aging.

There are some differences in the blend also. The DOCG is 90% Sangiovese, 5% Cabernet Sauvignon and 5% Colorino.  The Reserva is a straight up 85% Sangiovese and 15% Cabernet Sauvignon.  The nose of the reserva (for me) was more restrained, but I noted hints of cinnamon and balsamic (fir?) and violet. It offered some earthy notes also. The taste is deeper, dryer - especially until mid-palate when blackberry and black licorice announce themselves toward the finish.  The color is darker and the wine deeper in dark notes than the non-reserva, through it is still rounded.   Some grip (not unpleasant) was evident after the first day.

The non-reserva (for me) struck me as being deep with rich fruit, led with blackberry (as in farm stand mini-crates), and - with air - developed notes of raspberry. Nonetheless, the wine (either) is dry and while fruit is rich and deep, it is not forward but, instead, reserved: luring, suggestive, tempting: classic "old world". The reserva is this, but deeper and more dry. Aerate or decant either to allow the wine to open and gift you with its aromatics.  Expect some sediment with the reserva, which is natural. You can strain this out toward the bottle’s bottom when pouring if such is a problem.

With the reserva, consider pairing with short ribs (especially bison with a tomato sauce reduction), grilled lamb with rosemary and garlic, pecorino cheese and roasted chestnuts. I’ve enjoyed this wine with beef shanks and roasted root vegetables, brisket and prime rib; all of which begs the question – which wine is better?

And all is which is best answered remembering that “All palates are personal and correct for the people owning them.”  My advice?  Select your meal to pair with the season and then pair it with the wine.  The DOGC retails for less than $15 and the reserva averages $23 and can sometimes be found for less.  It’s best to start with one of each and make your own comparison.

All grapes used for either offering are certified organic. Vines (for either) grow at an altitude of 300 meters (984.25 ft) above sea level.  Soil (for either) is calcareous.  Exposure is SE (except Cabernet Sauvignon, which is NW).  Harvesting is by hand.