I’ve come across this grape before and each time, it seemed to present a chameleon like character: very unique as a varietal, sharing characteristics from label to label, but different in presentation from each vineyard.  What made me think about it again was recently tasting and writing about a Macedonian Pinot Noir that was blended 5% with Vranec.  VranEc is the Macedonian, and in Serbian, it has the “ac” ending. Whichever language, the grape itself goes back to the Middle Ages and has been cultivated since then in Bosnia-Herzegovina, Montenegro, Macedonia and, generally, throughout the southwestern Balkans.

Vranac is somewhat vigorous, and high yielding. It produces thin-skinned, black grapes in small bunches and with large berries and is sensitive to both frost and botrytis. But I’m unfamiliar with Vranac being made in a sweet style having been affected by “Noble Rot.”   The berries’ high sugar content can result in wines with high alcohol content (think Zinfandel).  In fact, it was often confused with Primitivo (think Zinfandel again) and modern DNA research shows they are closely related. Primitivo is sometimes blended with Vranac, through the wine of Monastery Tvrdos is not.  The bottle I enjoyed was 100% Vranac.

Monastery Tvrdos, I should explain, is the winery. Vines have been cultivated there (on and off) since the 15th century. The monastery was rebuilt in 1924 but the original stone cellar remained and is still used by the Orthodox Monks in conjunction with a newer one, built above, and allowing for gravitational transport of wine during processing. 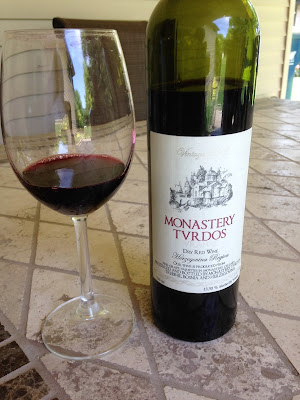 Monastery Tvrdos is in Herzegovina, 15 miles from the Adriatic Sea. Conditions here are dry and Vranac, being best suited to warm soil, thrives here. In fact, it has been a Protected Geographical Indication in Montenegro since 1977 and is considered the most important variety, and one of the most important in Macedonia.

It can produce wines with some bitterness, though I’ve always found this character pleasant in the finish of the various Vranac I’ve tasted and it has never been overbearing. Regardless of the producer, Vranac wines will be dark ruby in the glass. From there, you will generally have a wine of moderate aroma but with flavors that may include fresh berries, forest berries, sour cherry, blackberry, blackcurrant, chocolate, cinnamon, mint and vanilla (barrel imparted).

Vranac wines are ageable due to the variety’s high tannin content and levels of acidity, and wines can improve with age, becoming rounder with tannins softened and more integrated. Like Sangiovese and others, Vranac is an autochthonous variety. It does seem to be the product of natural cross breeding and mutations over the years within this particular area. I’ll leave the specifics of that horticulture to experts, but Vranacs share a character and unique taste that, once experienced, is not forgotten.  These grapes are not grown elsewhere. The wine truly is unique.
So, given what makes Vranac all the same, what is it that separates one label from the other, specifically the Vranac of Monastery Tvrdos?  Look again at the descriptors two paragraphs above. Most, though not all will be present, in varying layers of dominance.  I didn’t get mint and vanilla, for example.  Monastery Tvrdos ages in old, neutral wood. And all palates are personal but what I did get (as did another taster) was fig – in the aromatics. That seemed unique to this label. Red fruit? Yes. But dominant was dried cranberry.  With the wine recently opened, in fact, the dried cranberry was rather assertive, though not displeasing.  Over the course of an hour, the cranberry became less sharp as red cherry notes developed to compete. Overall, the wine of Monastery Tvrdos had smoother tannins than other Vranacs I’ve tasted. It seemed slightly more “new world” in style, more fruit forward and less bitter.

Although this wine seems a natural pairing to grilled meats and sausages, goulash or stuffed peppers, I’m thinking this label – with the wine’s unusual cranberry notes – would be particularly delicious against ribs in barbeque sauce.  At the very least, thinking so gives me an opportunity to enjoy another bottle.

Follow and Like Wine Mizer on Face Book for mini reviews of wine, suggestions on food pairing, industry news, fun facts and more.