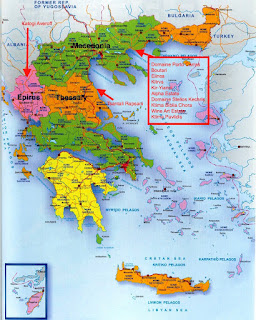 Alpha Estate’s Xinomavro (the grape is Xinomavro), is from the Amyndeon (a PDO) region in northern Greece.  Grapes for this wine are from a single vineyard (called “Hedgehog”) and grown on a plateau at elevation of 690 meters (about 2264 ft) with a northwest exposure, and face both Petron Lake and the Voras Mountain. Winters here are cold and the proximity of a body of water moderates the continental climate. With poor soil of sand and clay, but with excellent drainage, vines are water stressed. Berries are small with intense red color and concentrated flavor. As is so often the rule, good wines come from marginal areas.

Xinomavro is the predominant grape of northern Greece. Alpha Estates also makes a blended wine using it along with 40% Syrah, but I wanted to try an unblended “Xino”.  This is seriously good wine and an education for anyone having an interest in indigenous grapes of the world. 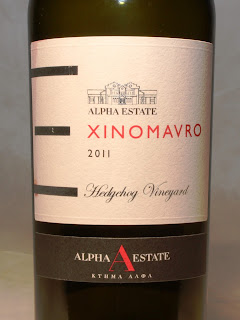 In the glass, its core is pale garnet falling to pale ruby with a thin iridescent rim and producing tinted tears.  Opened and poured, the nose offers cranberry and red licorice in a glycerin mouthfeel of tart cherry. My first thought was that this would be an interesting alternative to Zinfandel with any BBQ.  But more interest is solicited from this wine with air over the course of just two hours. Black plum, black cherry and raspberry become apparent with strong notes of cola.  Tannins are evident, but not harsh despite the “Xino” grape having that characteristic. The mouthfeel remained rich with strong notes of cherry cola, but the nose became more complex adding aromas of chocolate plum and brambled forest berries. The finish was long with notes of dark cocoa.

A powerful wine made so by the grape itself, I was impressed at the restraint and balance of tannin, acid and fruit in Alpha Estates’ Xinomavro.  In fact, the name Xinomavro translates to “acid-black”. But Alpha Estates‘ rendering of this grape into wine is a testament to the winemaker’s art and craft. It’s a harmonious composition.  Rather than BBQ and Zinfandel, I began thinking of this wine as a Nebbiolo and, indeed, the tannins inherent In “Xino” make it a wine suitable for aging, though it’s certainly enjoyable now. This is classic food wine offering notes too of leather and clove once properly aired.

Vacuumed pumped and sealed overnight, fruit became more evident and the wine (though dry) exhibited a deceptive sweetness of candied cherry. A wine of a “thousand faces” (all enjoyable) from a country that has been making wine for thousands of years. Don’t deny yourself this experience because you’re not Greek (neither am I). So you won’t serve it with stuffed grape leaves. O.K., but stuffed peppers? Why not?  Try it with any BBQ or red sauced pasta and eggplant; grilled red meats and sausages.  In fact, the most fun could be trying a bottle or two over a period of time to see for yourself how the wine develops.  After all, Greece didn’t just develop Democracy. They’ve been developing wine grapes for thousands of years.