“Too much of anything is bad. But too much Champagne is just right.” … F. Scott Fitzgerald


I enjoy Champagne. You might say I LOVE it.  But Champagne, by definition, is only made from the grapes of that region within France.  It excludes Crémant (also French).  It excludes Metodo Classico. It does not allow Cava.  Nor is Sparkling Wine allowed membership.  It is - that of Champagne which I crave - expensive and, so for me, not presently allowed as an everyday enjoyment. But to do without “tasting the stars” is inconceivable.

Then again, some of the best French food is of the bistro sort.  And some of the most enjoyable French wines are those of the Loire.  “Relaxability”.  Casual but elevated.  And so comes Gerard Bertrand of the Languedoc-Roussillon in the south of France.  Blending Chardonnay (70%), Chenin Blanc (15%) and Pinot Noir (15%), with the first and last grapes mentioned being those used in Champagne and with the wine being twice fermented in the bottle (as in Champagne) but with an ARP of only $20, there are differences and differences both to be appreciated. 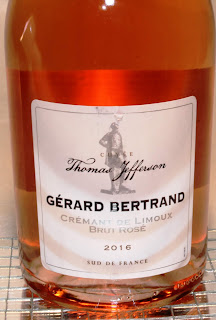 Of course, the climate is different in Southwest France than that of Champagne in Northeast France.  But Bertrand’s vineyards are maintained in the highest elevations of the area with cool nights assuring the cleansing acidity in the grapes that is so necessary for making quality bubbly.

All the tech aside however, always it comes to what is inside the bottle and I can tell you this.  My son and his significant other joined me for dinner.  I put together a simple meal plan, casual – but elevated. It began with an appetizer of slices of organic tomato, buffalo mozzarella, fresh leaves of basil and a reduction of balsamic di Modena.  Altogether, there were to be five courses and five wines.  I expected to put aside several bottles for enjoyment later. I was wrong.  The Gerard Bertrand “Thomas Jefferson” Crémant De Limoux Brut Rose remained on the table in a chiller and was quickly emptied.  That’s a strong endorsement – not just my opinion. 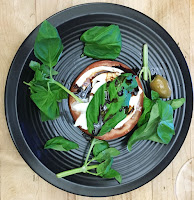 Casual, but elevated. And so quickly emptied.

Salmon-pink in the glass, it produces fine bubbles and a delicate mousse. Its texture is rich and surprisingly creamy.  Aromas of red fruit (strawberry and raspberry) seduce. On the palate raspberry carries over from the nose. The strawberry is elevated with notes of cream.  Toasted bread from lees aging adds complexity.  But for people put off by Champagne with pronounced notes of yeast (brioche etc.), this is not that. Casual, but elevated, the wine’s components work in synergy and balance; each element contributing unobtrusively toward a whole that is pleasing.  Citrus is joined with floral notes.  Fruit is evident and creamy, but the wine has spot-on acidity rendering a crisp finish that lasts. 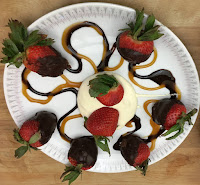 Against the creamy soft Buffalo Mozzarella, the wine matched in texture while also serving to cleanse the palate of that richness.  Dinner aside, it’s great to enjoy by itself.  Chocolate dipped raspberries would be fun. Brie cheese a natural. Ham croquettes, prosciutto, smoked salmon, sushi, mushrooms stuffed with crab, devilled eggs finished off with caviar, pates, tapenade, salad Nicoise. The acidity of a Rose Crémant makes it naturally food friendly. Gerard Bertrand makes it affordable.

NOTE: The monks of St. Hilaire discovered the first “wine with bubbles” in 1531. The vineyards used in making Gerard Bertrand’s Thomas Jefferson Rose are on the foothills of the Pyrenees where the grapes benefit from cool conditions.  Wine is blended together and then transferred to barrel for 8 months.  Imported by Wine West, LLC (Sausalito, CA).  ALC:12.5%