“Some sparkling wines are Champagne without the geography…. or the price tag.” …… James McMillan 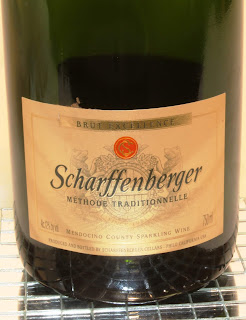 At the risk of being taken for a snob, I’ll admit to preferring French Campaign – or something intended to be entirely different (like Prosecco).  There are exceptions, of course, and I’ve written about some domestically made sparklers (on my Facebook page [like “Etoile” Brut from Domaine Chandon] and on this blog (see https://www.winemizer.net/2018/04/domaine-chandon-etoile-brut-sparkling.html)].  Now it’s time to mention another: Scharffenberger Cellars' “Brut Excellence”.

Scharffenberger began in 1981 in the village of Philo in the heart of California’s Anderson Valley. Only a few miles from the Pacific Ocean, the area benefits from the region’s noted sunshine moderated by the cooling fog coming into this protected valley from the coast. 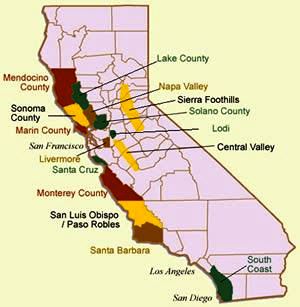 It is where, on their 120-acre vineyards, Scharffenberger grows the Pinot Noir and Chardonnay grapes used in making their Brut Excellence. 1   The location itself explains the “French Connection” in California with French Domaines (Moet & Chandon, Mumm, Roederer and others) buying land in California and making Sparkling Wine within the U.S., or working in partnership with established wineries.  Under these and other labels (with differences noted on them) you may choose to purchase the product made in California or France.  Each will be made according to Champagne standards.

Scharffenberger has no “French Connection” I’m aware of though I doubt Gene Hackman would refuse a glass.  It is, however, made in the methode traditionelle (traditional method), or methode champenoise (Champagne method) meaning fermented twice in bottle.  You may see terms like metodo classico on sparkling wines from Italy, Cava from Spain or even Cremant (Also from France but not made within the designated Champagne region).  Ageing requirements may differ, but be assured it is made in the twice-fermented-within-the-bottle style.

And while neither the name Scharffenberger nor the winemaker’s names (previously Tex Sawyer, now Jeffrey Jindra) bear much French resemblance, this sparkling wine is classically made and offers very good value.  “Creamy and lively, with festive apple and spice flavors,” says Wine Spectator.  One of the Top 100 Wines (of 2013) per the San Francisco Chronicle. A wine that’s remarkable for the money, says me.

On the nose, aroma of green apple and kiwi bathed in lactic acid. There’s a “sour” gooseberry-like note that is difficult for me to narrow down more precisely but I found it very pleasant. Regardless, a note of plum fruit and Rainier cherry balances this perfectly. On the palate, I loved the yeasty introduction of brioche with lemon (another taster said “lemon curd”). My opinion? The “curd” reference is more apt to the wine’s creamy texture from the juice resting on its lees for almost two years and the wine undergoing 100% malolactic fermentation.

The wine is dry (Brut, my favorite) and complex with notes too of almond and lychee nut. Fine, persistent bubbles. Other tasters said they enjoyed flavors of Bartlett pear, fig and mandarin orange. (I get the pear now that they mentioned it). Either way, at about $17, this sparkler screams out value. About two-thirds Pinot Noir and one third Chardonnay from their own vineyards and others nearby1 in cool growing Mendocino County (Anderson Valley) California. (Another reviewer reversed this percentage2. I’m going with the information provided by the winery itself as to the percentage of Pinot Noir and Chardonnay).

If you find many sparkling wines (or Champagne) too acidic and crisp, while Scharffenberger’s Brut does provide a crisp clean finish, it is rounded and creamy with vanilla notes and smoothed in its texture with surprising body.  It’s fresh, yet richer and deeper (yet with subdued fruit flavors) than other wines similarly priced. I found it lacking in nothing and with excellent, spot-on balance.

I tasted the wine without pairing it, but would suggest it is a (if not the) perfect match for trout amandine. Consider also, breast of chicken in a creamy white sauce, stuffed mushrooms or better yet deviled eggs topped with caviar/roe for the saltiness.