Mahatma isn’t remembered for his fondness of wine.  Nor is India well known for viticulture, though the country has a significant area in the SE and a smaller area (Kashmir and Punjab) under vine in the north. But old Mahatma was on to something.  Keep learning, he said.  So when I made bigos (Polish “Hunter’s Stew”) the learning opportunity came in thinking about what wine to pair with it.

Bigos is made from sauerkraut and white cabbage.  Then almost anything is all right: Wild game, fowl… whatever you have or is being contributed by your neighbors. I used portions of ham steak, pork tenderloin, smoked ham shank, some Applewood smoked bacon, a thick cut pork chop and Polish sausage (kielbasa) with onion and mushrooms (Polish, or use shiitake).  I left out the tomato and vodka. Since I don’t drink beer (piwo), it was going to be wine.  It’s always wine anyway.  But pairing a wine was the challenge, and a little counter intuitive since beer is the reflex option. 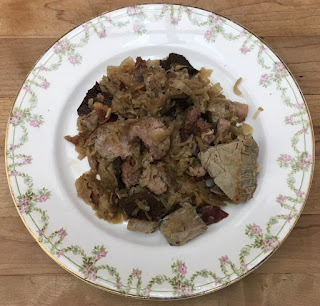 And here’s where I may lose some followers:  I selected a 2014 Maison L’Envoye (Fleurie Cru) Beaujolais.  There are ten crus in Beaujolais, with the crus of Fleurie, Chiroubles and St. Armour being considered the lighter styled.  Chenas, Mouilin-A-Vent and Morgon are age worthy and heavier with Brouilly, Cote de Brouilly, Julienas and Regnie in the middle.  Now if every SOMM hasn’t already written me off, let me finish the job by reminding them that Fleurie is French for “flowery.”  So I paired a flowery, lighter styled Beaujolais with a steaming dish of pork meats and cabbage.

Except Maison L’Envoye isn’t typical. Darker in the glass (medium vs. pale ruby) than many Fleurie, its overall character is unique. Lots of dark berries on the nose, it wafts with an unusual smokiness.  Nothing excessive, it is classically French.  But the smokiness (carried onto the palate) made this wine of medium body an excellent companion to the meats, playing nicely against the sausage and the smoked ham shank. The wine is finessed and elegant.  Plum and blackberry accented with white
pepper join in the aromas.   Fruit is juicy, yet restrained and in balance; most important – it’s presented as part of the whole.  Allspice adds complexity peaking interest above the primary tastes of blackberry and black cherry. A hint of black olive joins in.  Lifting all this is strawberry and raspberry red fruit.  Along the way, juicy blackberry see-saws against taut black cherry.  A harmony of tannins and acidity in Wallenda like balance against fruit envelops the package delightfully.

Pairing this wine with bigos wasn’t so far off after all, though no one will police your kitchen to see what you're serving with it.   Recommended are pork rillettes (surprise!) or meat terrines; a stew of ham and white beans (keeping it French but using the same protein).  I like it with pate or a charcuterie.  You’ll find it goes well with many of the same foods you would pair with a Pinot Noir.  And if you want to get cross-cultural about it, consider enjoying it with Chicken Milanese made with a sage and lemon butter sauce.  Then again, cold sliced ham works well too on the day after. 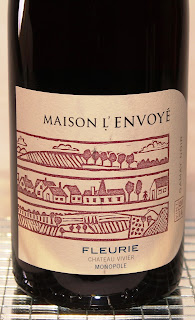 Point being, Beaujolais Crus suffers under association with Beaujolais Nouveau – that baby aged wine released the third Thursday of each November.  Fun, careless, celebratory, even ceremonial – but not the same wine as others of Beaujolais.  And the crus – all ten of them – represent the best of Beaujolais, each worth exploring.