“For everyday, we like Beaujolais, Grenache or Syrah, and we like a lot of it! It's a family tradition: We would never consider having a meal without wine.” ….. Jacques Pepin

Beaujolais. Not Nouveau, but not a cru (one of ten) either.  And not Beaujolais Villages. Just Beaujolais.  A simple pleasure, it is joy in the glass; a smile to meet the approach of summer’s warmth.   The wine to enjoy at a picnic with charcuterie.  Somehow these wines got lost between the sophistication of the ten crus and the disdain for the Nouveau.  Too bad.

Domaine Dupeuble has been making wine 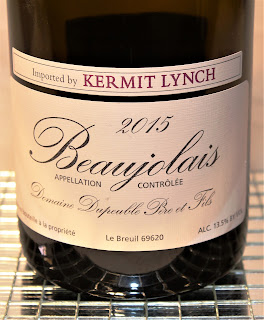 since 1512 in the hamlet of Le Breuil in southern Beaujolais (Eastern, mid-France, south of Burgundy and north of Lyon).  With a simple “Beaujolais” appellation, wines are inexpensive (ARP for this bottle is about $15, but I found it at $12.99).  All Beaujolais is made from Gamay and handpicked, and there’s a lot of it made.  Making your selection easier among the many on the racks is the labeling of Kermit Lynch on this bottle as the importer on both the front and back label.  Lynch was born in Bakersfield California. In 1972, he founded KLWM (Kermit Lynch Wine Merchant) and became an importer, retailer, and distributor of wines reflecting terroir. His “Adventures on the Wine Route” won the Veuve Clicquot Wine Book of the Year award,” and he has twice received the James Beard award. If that was not enough, he was also knighted by the French government with their prestigious “Legion d’Honneur.”  He knows wine and I have never been disappointed with any of his line.

Beaujolais is fresh red, something not often said together.  Light bodied, serve it just slightly chilled.  Consider that suitable for all Beaujolais (not all crus).  But when looking at Domaine Dupeuble Pere et Fils, appreciate that this bottling is made with all the care and attention that goes into making the crus. Carbonic maceration (different than conventional alcoholic fermentation which involves crushing the grapes) makes for wine that is fruity and with low tannins. That too is standard for Beaujolais.  But the Beaujolais rouge of Domaine Dupeuble (they also produce a blanc) is from vines averaging 50 to 100 years of age.  That’s a span, I admit. But vineyards need to sometimes be replanted, and fruit is concentrated at any point along that spectrum. Soil is granite, clay and limestone – so suitable for Gamay.  And all plots face Southeast, South and Southwest. Vines are tended without any synthetic fertilizers (natural compost is used) and no chemicals are used.  Yields are severely restricted by both pruning and “green harvesting.”

Only natural yeasts are used and the wine is aged in cement and stainless allowing for primary aromas and preservation of fruit.  It is vinified without the use of any SO2 and the wine is not degassed or filtered. What you’re tasting here is pure, pleasurable Gamay.  Lots of cranberry and cherry on the nose, the palate is vibrant with red fruit accompanied by a note of violet that serves to calm things down.  Balance? It’s Wallenda-like.  Bright raspberry and cherry offsets clove.  Earth offsets fruit.  Dark berries (black & blue) offset the bright red.  Tannin and acidity is just enough to remind you it’s there.  Nothing except simple joy is excessive. And who can get enough of that?

Vinous assigned this wine 90 points, stating: “… much more serious and powerful than its appellation would suggest.”  Wine Advocate   stated “… most impressive of all was just how well both their whites and reds age.”  Normally, the crus of Morgon, Moulin-A-Vent and Chenas would be those you would think suitable for some ageing, but in this and other aspects, Domaine Dupeuble exceeds standards and does so at “mizerly” pricing.