“If you want to start an argument in the wine world – and believe me, it’s not hard to do – all you have to do is mention the word terroir.”  …. Eric Asimov

December 4 is Cabernet Franc Day.  I’m sure the fourth of December also marks occasions for myriad reasons to celebrate, purchase and make many enterprises more wealthy, but this being a wine blog, let’s just focus on Cabernet Franc today.  Let’s focus too on the reason for this blog: it is not necessarily to review my favorite wines or even favorite styles of wine. Sometimes that’s difficult for me to remember because we all have our preferences and, well… we tend to prefer what we prefer. But while my palate is trained, it is not universal.  You may find favor in wines I do not. So one way for me to respect that and still serve a purpose is to occasionally focus on terroir – the combined effects of climate, elevation, slope soil, exposure and other elements that make for a variety growing in one region resulting in different tasting wine of the same variety but grown in a different region.

In the U.S. where we label wines by their variety, that’s sometimes hard for some to appreciate.  But think of Cabernet Sauvignon grown in Napa vs. Sonoma Valley or Washington State. Cooler climate makes for wine less fruit forward. Taste (side-by-side) similarly priced Cabernet Sauvignon of the same vintage but from these different regions and you’ll be tasting terroir.

Naming wine as they (the French) do by a sub-appellation wherein the grapes are grown is one reason many Americans don’t associate Cabernet Franc with, for example, Chinon. That’s too bad, because as I said, coming from the Loire Valley it is an area for that grape that many oenophiles consider the best sourcing of that variety. Chinon also is the most readily available of the three.  You might think also that involved with all that French fussiness, Chinon would be expensive. It’s not.  This Bernard Baudry (2015) has an ARP (w/o tax or shipping) of $15 U.S.

But before I get into this particular Chinon (Cabernet Franc) let me mention just a little about the area. Touraine is about 125 miles (200 kilometers) east of the Atlantic Ocean; close enough to benefit somewhat from the moderating effects of the ocean and gain early warming spring temperatures and relief from summers of draught in the more continental climate to the east. But overall, the Loire exists on the lowest baseline of where such grapes can ripen.  More easily stated, it is a cool, northern climate. When the grapes get enough sunlight and warmth, wines produced are elegant in their finesse and subtlety.  In good years, wines of Chinon entice with raspberry, violet and briary spice, but in poor years they can be thin.  In good years, wines are fresh and crisp yet lightly layered in fruit; fragrant with light tannins and high acidity. Light, zesty and refreshing, they are appreciated precisely because they are not fleshy and full bodied.  But if the weather is too cool or rainy, grapes will not sufficiently ripen and the wine will be thin, even herbaceous and harsh. This can happen also if elevage (maturation, the time between fermentation and bottling is too short). But that is technique, not weather related.

Bernard Baudry is regarded world-wide for his wine making role in the Loire having rose to prominence making focused, textured Chinon. He started the winery in 1975 with just 2.5 hectares (6.18 acers). He developed this into a 25-hectare (61.8 acer) estate out of family parcels and purchased land. His son Matthieu, who has worked with him since 2000, is now the head winemaker. Matthiew had experience also in New Zealand and California. His style exemplifies fruit picked at perfect ripeness levels, vinfied using state of the art modern technology married to ancient tradition. Read that to mean modern, temperature controlled stainless steel tanks and cement tank aging.

The soil there is gravel and sandy. The wine is unblended, 100% Cabernet Franc. Vines, at 27 to 30 years old as of the 2015 vintage, are considered young. 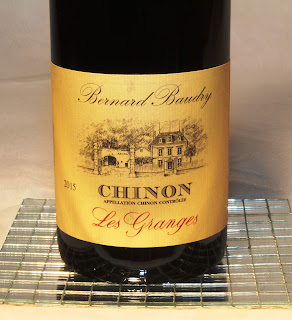 Vines are terraced along the riverbed benefiting from reflected sun and heat retained in the soil’s gravel. Baudry produces several labels of Chinon with “Les Granges” being the entry label. By intention, this is young, fresh wine, and I suppose you could accurately say it’s a “thirst quencher.” But using that term alone is insufficient.

This is a wine that rewards your attention to it and your effort to dissect its aromas of brandied tart cherry, violet and rose petal. In the glass: a mixture of tart cherry that develops smoky and dusty notes of violet, dark rose, earthy notes and dried herbs. This is “peoples’ wine,” but elevated tastefully to be a companion to roast chicken, charcuterie, grilled lamb, beef stew and simple foods and cheese.

Domaine Baudry has operated organically for decades and since its inception has believed in minimal intervention both in the vineyard and the winery. In 2013, because of inquiries from consumers, the winery completed the process of becoming certified as organic. You may not be able to taste the difference in organic and non-organic wines, but this Master Gardner believes organic is a good choice when possible.  And he’s suggesting that, regardless of organic or not, you taste the terroirs of Cabernet Franc.  Join me on a short expedition that should resolve the argument Eric Asimov referred to. In a few days, I’ll post again about a Cabernet Franc from another country you may not associate with this varietal.  Different? You bet! Better? That’s for your palate to decide. And that’s the whole point of this exercise.