ON PREMISE LABELING OF WINE

“Listen, Peaches, trickery is what humans are all about," said the voice of Maurice. "They're so keen on tricking one another all the time that they elect governments to do it for them.”  -- Terry Pratchett, The Amazing Maurice and His Educated Rodents 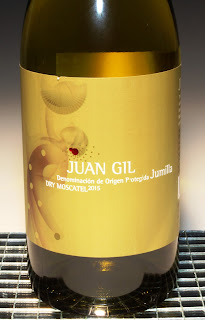 Many restaurants will not show wines on their list that are available at retail outlets because if you know the retail price, you could lose your appetite by what you were being charged at that restaurant for the same wine.  A wine that I enjoy with oysters for example, Juan Gill (a dry Muscat) retails for $10. At my local oyster haunt, ordering it will tack $50 onto the bill except on half-price bottle night when it is $25. The restaurant’s cost for that bottle is around $7.50.  It’s a very good wine, goes nicely with oysters and other seafood, but at $50 it will sour your stomach. Let me mention – before you do – that I would prefer a Muscadet Sevre et Maine Sur Lie, but none are offered. And the Juan Gil does very well. Anyway to avoid this embarrassment, some restaurants purchase “on-premise” wines. These are wines specifically labeled for restaurants and not available in grocery stores.  Lots of wineries make “on-premise” wines. Sycamore Lane’s Pinot Grigio is an example. It’s from Trinchero Family Estates in Napa, though you won’t see the name Trinchero anywhere on the bottle.  I was able to find one big box retailer that carried this wine, but generally, you won’t see it on the shelves of liquor stores.  In fact, the website states: “Because

Sycamore Lane wines are not sold at retail, cost comparisons will never be an issue, so you can price this house wine appropriately.”  A bottle of Sycamore Lane at the restaurant I enjoyed it at recently (with a Caprese salad) cost $24.  The advertised case price to the restaurant is $68.29 bringing their cost down to $5.69 per bottle (less with large orders).  Actually, that markup (321%) is not uncommon and better than the dry Muscat at 566% (though at half price, the Muscat is a great deal (233%).
Then, there is custom labeling as in the example of Starved Rock Merlot, made by Rutherford Wine Company of St. Helena California.  Starved Rock is a state park in Illinois and no wines are made in the park, certainly not Merlot.  The label clearly states it is from California and Rutherford is identified on the label.  It’s labeled for local sales at gift shops, hotels, retail stores and other outlets.  Many wineries offer custom labeling and you can have labels from some wineries made to occasion almost anything: birthdays, anniversaries or almost anything per whatever standards the individual winery may have.  You can order wine and have it labeled with your name as in “Bob’s Select Cabernet Sauvignon,” though if your name is Charlie you may not want to do that. Rutherford’s site states that “Exclusive Branding Private Label Programs” enhance image and build customer loyalty, and “offer customers a uniquely branded wine unavailable in retail” and, perhaps most important to sellers: “Realize increased margins over nationally branded wines.” 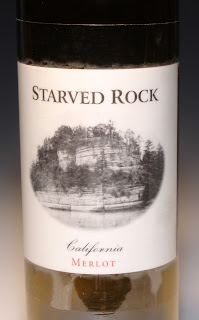 Rutherford’s Merlot isn’t made exclusively for Starved Rock.  It’s labeled for Starved Rock and is the same Merlot that Rutherford makes and labels for other outlets through their Private Label Program. At $17 retail for this bottle, it’s nicely priced and tasty enough not to cause indigestion.  In the lodge’s restaurant at Starved Rock, expect to pay about $30, which should not spoil your appetite.  In fact, at about 300% markup (from their cost, not retail), it was the best deal of the three examples, discounting half price bottle night in the first example. But such markups will vary from restaurant to restaurant. Before I leave this mention of Private Labeling, let’s consider that the purpose of this type of labeling is broader than simply increasing margins.  It considers the “cutesy” factor of souvenir labeling.  For many, there’s a value to that.

And there’s nothing deceptive about a restaurant charging $50 for a nationally branded wine that retails for $10.  Whether that’s smart, well that’s another matter. Caveat emptor, after all. The information is out there. Full disclosure. And the restaurant will not refuse you service if you don’t buy wine. With wages, rents, waste, equipment costs, insurance, licensing and so many other costs, restaurants whine that their margins on food are so thin that they need these markups on alcohol to remain in business.  Whether that markup should be five times the consumer’s retail cost is ultimately each consumer’s decision.  One could argue that reducing that markup would net more sales, but I have to assume the bean counters have already analyzed that potential. No matter what you may think of these markups, there’s nothing deceptive about them.

Then too, you could probably say the same about “on-premise” labeling. Many restaurants will offer diners a small taste of a wine when asked. Then it’s up to you to decide if the wine is worth the price. In “blind” wine tastings, tasters are not allowed to see the bottles lest it influence any ratings the tasters assign.  I’ve tasted wines of lower cost which I rated higher than those costing more. No surprise there.   But it’s the intention of “on-premise” labeling that instinctively bothers me.  It is centered on deception, fooling the customer. Worse: “on-premise” labeling restricts the consumer’s ability to learn about the wine. Seldom will you even know the winery. For certain, you’ll not be able to learn anything about its vinification.  For people who deeply love wine, this is the greatest affront.

Did “on premise” labeling come about by the greed of restaurants and their scheme to keep customers in the dark?  Was it simply a business decision that was made because customers won’t acknowledge the restaurant’s cost of doing business and their need to expand profit margins in order to remain in business?  I don’t have the answer, but like you – like us all – I have the power of choice.  Personally, I find five times retail cost objectionable. But complaining to a server accomplishes nothing other than adding grief to their day. Consider sending a note to the owner or corporate headquarters.  If it’s met without sufficient explanation or a change in pricing, explain why you won’t be returning.

One more consumer note: usually the restaurant’s cost (not price) for the bottle is met with the price they charge you for one glass.  If the price of a glass is shown as $8, you may assume that’s what they paid for the entire bottle.  Assume 4-5 glasses per bottle, look at the price of the bottle and do the math. In most cases, you’re better off buying the bottle. Then decide as an educated consumer if you want to do a wine purchase. Voting with your pocketbook does eventually get noticed.