“The best wines are those we drink with friends.” …… unknown

A miser could be taken to mean a person who is reluctant to spend, but it can be used also to describe someone who has a proclivity to hoard or, to be nice, – collect.  So when I chose the name Wine Mizer1 for this blog, it was an acknowledgement that my actions can at times fit either definition.  I have a reasonable collection, but included within it are many value wines.  If you’re a longtime reader, you already know that most reviews here have been for wines with retail prices below $30. Today it is not, though I still consider the wine (priced at $60 - $120) a good value.

Now for the shocker. Remember, the French label their wine by region, not by the grape.  So “Blanc Fume de Pouilly” in the name may not be helpful toward knowing the varietal.  Translated, it reads “White smoke of Pouiilly.” “Domaine Didier Dagueneau” is the name of the Chateau (or “Estate” in the U.S.) Again, no help perhaps.  But you may have heard of Pouilly Fume, the AOC in the Central Vineyards (which are NOT central, but at the easternmost area) of the Loire Valley.  Pouilly-Fume sits across the river from Sancerre.  O.K. Let me just get to it: This is Sauvignon Blanc!

You’re thinking, “$100+ for Sauvignon Blanc?”  After all, every country makes it. You can buy it for less than $10. Why oh why would you spend ten times that?  All I can say in my defense is that a canned product of pork shoulder and ham with salt, water, potato starch, sugar and sodium nitrate is meat and so is filet mignon. And while I have enjoyed many a delicious Sauvignon Blanc (both French and non), none have matched the experience. As in so many things, it’s a question of degrees. 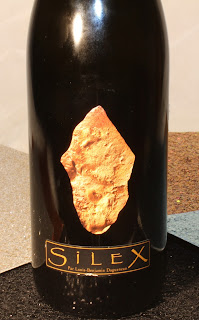 Soils in the Pouilly-Fume (stony, chalky, well-drained and with marine fossils) are much the same as in Sancerre but with more flint. But, unlike Sancerre, no red wines are made here.  The climate is continental with severe winters and hot summers. As with Sancerre, Sauvignon Blanc produced here is in a style more restrained than that of New Zealand’s.

The Dagueneaus have long worked to finesse the best from Savignon Blanc.  Selecting sites, blending juice and working with top coopers using very low-toast barrels, uniquely shaped to nuance the benefit of lees contact and specific oxygen exchange, the end result is a wine that transcends both definition and your expectation. Best said, perhaps, by Eric Asimov of the New York Times in his obituary of Didier Dagueneau (who died Sept. 17, 2008): “Tasting a Dagueneau wine for the first time was a revelation. His Sauvignon Blancs had an unexpected purity and clarity to them. The flavors were intense but nuanced. It wasn’t the fruit that was piercing, as in so many Sauvignon Blancs, but the freshness and the focus. As powerful a personality as he was, his wines did not exalt the stature of the winemaker so much as the beauty of the terroir.”
Didier was survived by his son (Louis Benjamin) and daughter, Charlotte, who have maintained the passionate commitment of Didier in producing wines that bring out the natural minerality of the soil and are palate poems of balance and harmony made even more seductive by aroma of acacia.

I keep saying that all palates are personal, and they are. A little web-trolling in preparing for this review popped up one reference to “greenish, grassy aromas” and another of “underlying herbal/grassy notes” and one more of “green grass” on the nose.  I didn’t get any of this and I’m glad I didn’t.  In discussing why his wines never undergo malolactic fermentation, Louis-Benjamin said, “It’s no problem to wait for malic acidity to decrease when the grapes are at 12 degrees of potential alcohol. When they’re at 14 and you still feel that you have to wait for the malic, then that’s what gives you anxiety. We’d rather make a wine with a little more alcohol than we’d ideally like, rather than pick earlier and still have herbaceous flavors. There’s nothing worse than sauvignon with green flavors, like asparagus.” (emphasis mine).

Others referred to passionfruit, honeydew, guava, fresh cantaloupe. Some of these flavors are there but, for me, much subordinated to the citrus of preserved lemon, lime, quince and orange zest. Some white peach. A thread of smoky minerality weaves throughout the citrus along with a hint of salinity. Fruit, for me, was more applely than tropical, but again, all palates are personal. Along with this incredibly seamless weaving of tastes is an acidity that cleanses the palate, makes for a mouthwatering invite to another sip and is yet artfully unobtrusive. Dry, racy, complex – especially for a white – this wine is at the top of the pecking order of Loire Sauvignon. Despite all the citrus, there is a roundness and silkiness to this wine.

Another measure of quality is the cellaring potential of this wine. Most Sauvignon Blanc is meant to be enjoyed young.  But Domaine Didier Dagueneau’s sauvignons are famed for their longevity. This wine (a 2010) is drinkable (easily) through 2024 under good storage conditions. If you’re sensing I’m excited about this wine, know that I’m in good company. Robert Parker awarded it 93-94 points. Stephen Tanzer gave it 92. Jancis Robinson assigned it a score of 17.5 out of 20 potential points. Those are all grades, as I remember them, of A.

Younger people today talk about the experience. Allegedly they eschew material goods, forsaking the purchase of automobiles and relying instead upon purchased rides. It’s all about the vacation to a distant land rather than a possession.  It’s the memory of an event more than an item. Seems then that a Domaine Dagueneau Silex would be perfect, both for the experience and the memory of it. I know it was for me.  Speaking of me, let me add that I found this bottle as an “End of Bin” in a big box store.  Retail was $115. I bought it for $48. Rather Mizerly don’t you think?

1. Ben Franklin was a strong proponent of phonetic spelling. I think he would approve.

Incidental Tech Info
Domaine Didier Dagueneau Silex is a blend from two parcels. One of hard, dense clay and flint on the upper part of the Saint Andelain hillside and the other of limestone. Alcohol ranges between 13–14.2%. Acidity is 6.2g/L. Wines are held in oak (elongated cigare pipes, barriques, demi-muids and foudres) for their first year, then transferred to vat for 5-7 months before bottling.  Imported by Connoisseur Wines.

Sorry about the length. The wine deserved respect.