But as was said in George Gershwin’s 1935 opera “Porgy & Bess”, “It ain’t necessarily so.”  While Frank Sinatra (backed by a terrific band) made a terrific song, when it comes to wine it is definitely not so.  Recently I had an opportunity to taste some of the estate wines of Villa Bellangelo. The wines were not only delicious, they served to affirm the importance of terroir.  Bellangelo Vineyards and Winery is located in Dundee near Seneca Lake in the Finger Lakes Region of New York. 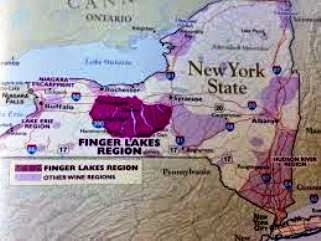 The conditions for ideal grape growing in this region were actually set into motion tens of thousands of years ago. Retreating glaciers deposited a layer of topsoil on shale beds above the lakes. Seneca Lake is the deepest of the Finger Lakes at 618 feet and rarely freezes. And the lakes (there are eleven) moderate the region’s temperatures.

Move forward several tens of thousands of years and I was enjoying wines from the Finger Lakes here (in the Midwest) in the early 1970’s. But as California gained prominence, retail outlets allocated more of their limited shelf space to that state’s offerings, as well as to the expanding market here for non U.S. wines, and New York’s wines became difficult to find and enjoy. More the pity because these wines are affordable and exciting and truly unique. As Chateaubriand and Filet Mignon are similar, they are also different:  Bellangelo’s Gewurztraminer is similar to Alsace, and its Rieslings are similar to those of the Mosel region of Germany - similar but so appreciably different. Any lover of wine who professes an appreciation of terroir is self-obligated to taste Villa Bellangelo and other wines of the Finger Lakes.

1)    2013 Seyval Blanc $16.  I’m starting with this wine because I generally don’t enjoy Seyval Blanc and there always seem to be so many other white wines to enjoy. For me, Seyval is weak in character; listless, wondering what to make of itself.  Even its color is non-descript.  But the nose of this rendering from Villa Bellangelo immediately captivated me. Character a plenty with notes of quince and lemon. Silky mouthfeel. Back taste brings in hints of orange and vanilla. A white wine of balance that plays with all its flavor hints in tandem and with a surprisingly long finish.
2)      2012 Gewurztraminer $20.  Nose is faint, but pleasantly floral. Kiwi, peach, quince, lychee. A luscious mouthfeel (more glycerin like than the 2013). Long finish.  Both this and the 2013 share similarities with a Gewurz from Alsace yet provide a uniqueness that give a sense of place and make these wines so fun to drink.
3)    2013 Gewurztraminer. Nose of honeyed peach that carries into the taste along with apple that develops noticeably. Sharper acid finish.
4)     2013 Cabernet Franc $18.  Cherry colored in the glass – like a Pinot Noir. I’m concerned the wine may be thin.  Then again, I recently had a Cabernet Franc from Argentina that was hot-climate deep purple and tasted too much like Cabernet Sauvignon.  I’m looking for the graceful, unassuming but balanced style of a Loire style Cabernet Franc.  Another reviewer visited unexpectedly and I offered him a taste. “Delicious” he said immediately.  I enjoyed a delicate nose of sour cherry and raspberry and a taste of cherry cordial chocolates. A little alcohol-black pepper in the throat that thankfully wasn’t present in subsequent tastes.  My fault – I needed to give the wine more air and will be tasting this again.
5)     2013 Semi-Dry Riesling $18.  The nose is Mosel:  smell/taste this wine blind and you might take it to be an Auslese. Tart green apple that softens in the taste as sweet ripe pear develops. The tart-sweet interplay mid-palette is intriguing, but the experience continues as an interplay develops between honeydew melon and pear. Who said white wines can’t be complex?
6)      2013 Dry Riesling $18.  Classic, pale straw in the glass with edges that are almost translucent. Again, looks like a Riesling from Mosel. Nose is light, delicate and floral with orange blossoms. Heavier bodied than a Mosel Kabinet, it offers Granny Smith apple and Meyer lemon with hints of orange and a taste that just continues to build in this uniquely characterized wine. Long finish. 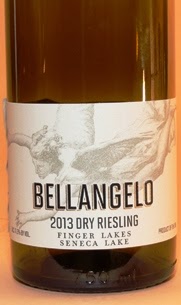 Frank Sinatra had a great song, was a great singer and certainly could afford to buy great wine. But what they do in New York is unique and just can’t be done anywhere.  The sampling of wines from Villa Bellangelo delighted me with wines that are graceful, play with the senses and uniquely reflect a sense of place.  And you needn’t have a star’s pocketbook to afford them. At prices shown, these wines are super values.

Email ThisBlogThis!Share to TwitterShare to FacebookShare to Pinterest
Labels: Wineries and Vineyards