Wine enthusiasts have learned things about the human body that medical doctors have yet to officially recognize:  taste buds are not only in the tongue and the nasal passages. They are also in the eyes and in the brain! Witness the recent scandals in which lesser quality wine was sold and auctioned in bottles wearing prestigious and “designer” labels.  Such trickery is not new. Legend goes that the wire mesh around the neck and cork of Spanish wine was to assure that the wine inside the bottle was that from the labeled winery and not something later exchanged.  Many people that know wine have been fooled because the taste buds in their eyes told them the wine was better than what it was..

Knowing how “eye taste buds” affect other taste buds, people that love wine taste it “blind.”  I did this recently when I enjoyed a pinot noir from a prestigious and deservedly well-respected Oregon winery and, thinking back to another pinot noir I had tasted,  concluded that the nationally respected pinot didn’t measure up to that of the regional winery.  The problem with that is that my conclusion involved calling upon “memory taste buds,” also not to be trusted. What was needed was a current, side-by-side comparison in a blind tasting.

I put a nice meal together, and invited another wine enthusiast (The ChicagoWino) and backed up the whole event with several other wines.  I had a bottle of the Oregon wine in stock. The Chicago Wino, at my request, stopped at the winery to get the Lynfred Pinot Noir and also graciously brought  their 2009 Pinot Noir Reserve.  I was sure my earlier experience was not with the reserve, but we included it in our blind tasting anyway. 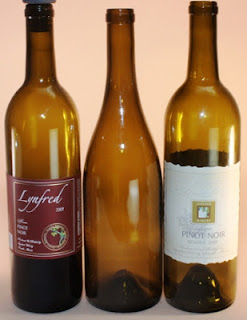 The bottles were opened, their foils removed, and each bottle was bagged. The bags were banded tightly near the lip so that no hint was visible. Neither I nor the Chicago Wino was present during this process, and the person doing this did not participate in the tasting. Finally, the tasting was before dinner and before enjoying any of the other wines (which were to be drunk, not just tasted. So our taste buds were not dulled by over-indulgence nor influenced by a food). That’s about as scientific as I’m capable of being.  But, of course, we both did know the wines being tasted, so it was not perfectly “blind.” Interestingly, that became a learning lesson too and demonstrated the power of the brain’s taste buds.

I immediately identified two of the wines as being very similar: young fruit, cherry in color and taste, light and simple, slightly astringent. Great picnic wines. Easy drinking. Charcuterie wines.  When the bags were removed, it turned out that both The Chicago Wino and I preferred the Lynfred 2009 Pinot Noir to the more expensive Oregon. My impression was that Lynfred’s wine was slightly deeper in color, its taste smoky and offering some earthy aroma - so a little more “bang for the buck.” Actually, it was more bang for considerably less buck!

Comparing any reserve to one not wood aged and more fresh is not a comparison. It’s comparing fish to beef. It is Taste 101. But here is where the dangerous brain taste buds come in:  My physical taste buds recognized the complexity that came with aging. But my brain taste buds insisted the wine just had to be Oregon (“No man is a prophet in his hometown.”)  The wine had layers of flavor, notes of leather and tea. This wasn’t the wine of a regional winery. It had to be Oregon.  And this is a perfect example of the brain’s influence (read that wine snobbery, read that wrong thinking) over what we taste – or think we do.

Of course, you probably figured out by now that the wine ranked #1 in our taste was Lynfred’s 2009 Pinot Noir Reserve.  At $25.25 it still cost 6.5% less than the Oregon (quite an accomplishment given that Lynfred has to deal with the cost of shipping grapes) and was much preferred by both The Chicago Wino and myself. I’m looking forward to enjoying another bottle of this wine with a dinner of, perhaps, duck breast and savory fall vegetables. That said, a caveat: More than 2000 years ago, Pliny the Elder said, “The best kind of wine is that which is most pleasant to him who drinks it.” That’s because he understood that tastes are subjective.  I found Lynfred’s 2009 Pinot Noir (non-reserve) to be similar in profile to the pinots of Oregon (despite that the grapes are from Washington).  Once your learn the style of pinot that you prefer,  you may think pinots from the Russian River Valley in California (which has itself many distinct areas) or the Cote d’Or in Burgundy France more pleasant. You may prefer the lighter, more fruit forward style of a non-reserve wine over one aged in oak. That’s O.K.

Email ThisBlogThis!Share to TwitterShare to FacebookShare to Pinterest
Labels: Red, Wineries and Vineyards