“Wine is like a liquid representation of who [the winemakers] are and what makes them tick. It's also all about making memories. Your olfactory senses are intrinsically linked to memory, so when you're sharing a bottle of wine, and then having it again, you're dredging up memories. And for me that's just a super romantic, beautiful, poetic thing.” …. Brie Roland, "How to Drink Wine Without Looking Dumb or Going Broke"

Thanks go out to the winemakers at Lynfred Winery (Andres Basso previously of Concha y Toro and Rodrigo Gonzalez with experience from Casa Lapostolle) for producing this 2015 Cabernet Sauvignon.  In the process, they unknowingly saved my dinner.  Having some basil pesto made and saved from my summer’s harvest, I prepared wild caught, pink shrimp and finished them in warmed pesto.  Some spiralized zucchini with aglio y olio finished with grated Parmesan Reggiano and a petite filet mignon basted in herbed compound butter completed the meal. 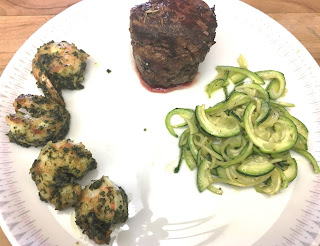 It was one of those rare occurrences where everything came out nicely.  The problem was the wine. I had at the ready a red blend from Napa Valley assuming my guest would prefer it. She didn’t, nor did I. Much too fruit forward.  But I had a backup: a Barbaresco – no expense spared. An Italian Nebbiolo against a meal structured to be somewhat Italian should work. And actually, it was delicious but didn’t pair well against the filet.  Not taking any chances, I also had the Lynfred 2015 opened.  The Cab happened to be their monthly release (December).  Cab works, of course, with beef.  But shrimp?  Well, I had the bottle anyway, so “no harm”.  A Somm at Lynfred (now at a satellite location though still with the winery) talked of pairing Cab with lobster and it was a standing disagreement between us.   Now I think he’s on to something. Then again, I’m not sure I would sauce a lobster with pesto.

The reason for the red blend was that my guest often finds Cabernet Sauvignon too tannic.  But this rendering of Lynfred’s (90% Cabernet Sauvignon / 10 % Merlot) was eminently drinkable.  Sourced from the Jones Vineyard in the Wahluke Slope of Washington and Lodi (Central Valley California) and vinified at the Roselle (Illinois) winery, the Cab was not tannic (which was my guest’s concern).  And with Washington fruit, the wine was better restrained; for me – more elegant, when blended, than the heavier and too fruit-sweet wine of the more prestigious area within California.  My concern with Lodi grown grapes has subsided over the years, tasting what Zinfandels this appellation has produced.  With 110,000 acres in size and producing more wine grapes that any other California appellation, Lodi’s claim to fame was also its marketing “boat anchor”.  Bigger is not best.  And bigger, by definition, means numerous micro-climates, plots of different soil, and different exposure within the behemoth AVA.  An experience that delivers less than expected blemishes the entire appellation.  (Another reason for more earnestly considering dividing this appellation).

As I like to say, “What’s inside the bottle” tells a better story (when selecting from such an appellation) than what’s on the label. And what’s in this bottle is – and worked – perfectly.  Cassis, green pepper, cherry on the nose in a wine that appears deep garnet in the glass.  Forrest berries and baking spice on the palate. Some grip makes itself evident, though moderated and the tannins soften and gentle even more with air.  Air, not needing to be excessive, is nonetheless this wine’s friend.  Decant and appreciate aromas that now add violet and sweet tobacco (unlit cigar) to those already mentioned. Add in slight hints of mocha, vanilla and black pepper.  The taste benefits also with the addition of blueberry, toasted oak, cedar and dark (unsweet but not bitter) chocolate.

And then there is the spice.  Not spice as in “hot”.  Spice as in “tasty”.  In fact, this wine is made so deliciously complex with spice that I continue to buy and taste bottles of it to better understand.  The winery’s promo refers to “sage,” but I find it much more complex and intriguing. In fact, one of the reasons I so enjoy this wine is its spice:  enjoyable while yet being difficult to narrow down.  Clove, black licorice, black pepper intermingled with vegetative tastes of green bell pepper and eucalyptus and dried green tea.

But I’m getting lost in describing this wine without getting to the point that it served so well against the shrimp in pesto. Cleansing and complimentary.  The acidity cleansing the palate of the oil in the pesto, the wine’s spice complimenting the basil, cheese and spice used in making it.  I so enjoyed this wine that I will be making this dish again as an excuse to open another bottle and revel in its complex spice.  Needless to say, it paired well against the petite filet mignon, but that was no surprise. Thanks, Lynfred.  I suspect whenever I open a bottle of your 2015 Cabernet Sauvignon, I’ll remember the moment.

Winemizer.net does not accept any advertisements, nor is it affiliated with any winery, vineyard, importer or distributor.  You may be assured that any opinions are not economically biased (though they may not be appropriate to your individual and unique palate.

NOTE:
Lynfred’s 2015 Cabernet Sauvignon will be available to the general public on March 1, 2019 priced at $25.25.   It is available presently to members of either the “New Release” or “Red Wine” club and discounted at $20.