“There are 6,000 Californian Pinot Noirs and more than 4,000 of them are in the same bottle. That’s 4,000 brands trying to tell you they are best using only a four-inch piece of paper. No wonder the wine consumer is dazed and confused.” ....Kevin Shaw, Wine Business Monthly

No worries of that happening with any of the Metz Road labels.  Fact is,  I was shopping for a different bottle of Metz’s Pinot Noir (specifically a 2015 “Riverview Vineyard”) for a piece I wrote on this same blog about that wine. (Click here for that review).  The retail liquor store didn’t have that bottle in stock but did have a 2013 “Meso del Rio”.   Same varietal, also the “Metz Road” label.  Same Scheid Family.  Grapes from the same (Monterey) county in California, but not the same wine (albeit a different vintage).  For me, that is what makes wine so fascinating and challenging. And for me, that is what makes the wines from Scheid Family so appealing and deserving of respect.  Every bottle I open asserts its unique character.  While Metz (or Scheid) varietals have siblings, there are no twins in the family.  Each bottle opened has its own personality.  If you’re a parent, and have even two children, you can appreciate that.

Metz Road “Riverview” is single vineyard juice from the Riverview Vineyard and branded for the road (Metz) running alongside Riverview Vineyard. The vineyard is nestled on a bench high above the Salinas River and near Monterey Bay. “Mesa del Rio” is a single vineyard on the western side of the Salinas Valley at the mouth of the Arroyo River.  Its juice too is racked to 100 French Oak barrels (60% new) for 20 months.  But, most important, the sites are different.  If you’re a gardener (Master or not) you can appreciate the contribution of micro-climates; that the coleus I planted as an annual came back the next year (in the cold of USDA Zone 5a) though it didn’t survive.

If there’s a lesson to be appreciated, it’s that you can’t judge a brand by the single bottle you tasted and, perhaps, found at your local grocery store; it’s that wineries produce wines from single vineyards because those various vineyards produce grapes that make for wines of different character.  It’s that wineries produce wines of the same varietal at different price points.  It’s that Pliny the Elder said, “The best wine is that which tastes good to thine own palate.” And it’s that the French understood that idea decades ago when they popularized the word terror; and long before them, the Romans, though they didn’t term it. 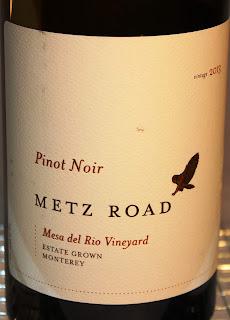 So “Mesa del Rio” is not the same as “Riverview Vineyard” through both are “Metz Road” branded and both from the same Scheid Family of Wines and both from cool-growing Monterey County. And thank you Metz for that.  But as for which is better, I would refer you again to Pliny the Elder.

I found “Mesa” lighter bodied, lighter even in color than “Riverview”.  Mashed cherry on the nose, berries, some cranberry, strawberry and cherry – nothing out of scope or unexpected, except the spice.  “Spice” as a term is often misunderstood. And it’s also miscommunicated.  White pepper or black?  Cardamom, allspice, baking spice – what exactly is baking spice, anyway, to people that do not bake?  Fear not.  What was unusual, uniquely foot tapping in its noticeability was an aroma of “Sen-Sen,” a licorice breath freshener that went out of production in the U.S. in 2013.

For today’s readers, we’ll use the term “licorice” for “Sen-Sen.”  But for readers that accumulated some decades and memories, let’s stick with “Sen-Sen,” that unique combination of licorice, anise, gum Arabic, maltodextrin, sugar and natural and artificial flavors which set the brand apart --- but with one caveat: there is nothing artificial about this wine. It’s 100% an issue of terroir and 100% an opportunity to enjoy and appreciate the differences of and benefit gained from tasting single vineyard wines.  I should add that the “Sen-Sen” was not dominant; in no way obtrusive, overpowering or detractive.  In fact, it was seductive.  The aroma had me and I had to keep tasting to better explore the character in this wine-play of several characters.  Anise? Yes. Licorice? Yes, but different… unusual and very pleasing.  New.

I enjoyed red fruit (and red licorice) on the palate, complexed by a note of clove and black licorice in a super-long finish (the black licorice being the “Sen-Sen” in its unique presentation on the palate and on the nose).  “Sweetie” detected anise (which will now be included in “Sen-Sen,” and sets the wine from this vineyard apart.

Very light tannins (it’s Pinot Noir after all, but light even for that).  My take: It’s a light and cheery wine, silky, eminently drinkable, enjoyable and uncomplicated. Others refer to notes of vanilla, butterscotch and blood orange, black cherry and raspberry (include raspberry in my reference to “red fruit”).  Include cherry – it’s Pinot Noir, so no surprise. Some get blueberry.  For me, it’s an elegant version of the expected classics rendered in Pinot Noir, in good balance, while being a simple presentation but with that interesting plot twist.  It lacks the earthiness, depth and power of “Riverside”. But for many palates, that is its grace. It’s apart enough from the horde to be noticeable but shares enough character to be welcomed as a member of the Pinot Noir family you’re familiar with. While I prefer “Riverview”, I find “Mesa” an excellent warm weather summer red, a great wine to enjoy outdoors with a charcuterie under blue skies. A wine to casually cuddle up and relax with or simply enjoy on the deck.  And if anything is wrong with that, especially with an ARP of $30, someone will need to explain to me what that is.

The micro-climate of Mesa del Rio benefits from moderate conditions and cooling afternoon winds. Evening coastal fogs in the spring and summer often linger until mid-morning the following day. This cooling effect slows photosynthesis and extends hang time and ripening.

From the winery’s vintage tech sheet for this wine: “Metz Road was created out of our desire to express the unique terroir of our single vineyard site. At Scheid Family Wines, we grow Pinot Noir on six of our estate vineyards. For Metz Road, we select the top vineyard block from each vintage to craft a vineyard-designated Pinot Noir that is genuine in style and exemplifies this complex, temperamental varietal.” (emphasis mine).

In 1977, F&F of Chicago purchased Sen-Sen and Smith Brothers from Warner-Lambert. As a package deal, F&F’s purchase included the old machinery needed to make Sen-Sen and, with it, the secret formula (said David Barnett, Marketing manager of F&F).  “Secret formula?” he was asked. “Oh, yes,” he replied, “very secret.”  “More of a secret even than Coke’s original recipe.”  Ingredients were imported from Bulgaria, France, Turkey, Greece, Italy and “some almost inaccessible regions of Asia.”  That I should remember Sen-Sen concerns me. That you might expect a more exact description of its tastes from me – given how secret the formula was – should concern you.