“More important than food pairing is the person with whom you drink the wine.” …. Christian Moueix

If you can take a French grape from Cahors, France that was better received in Mendoza, Argentina and make it so well in Sonoma County, California --- you got me!

This bottle of 2010 Rodney Strong Vineyards “Dry Creek Valley” (single vineyard) Malbec slipped through the cracks of my racks so to speak. Would it still be good? Rodney Strong is the vineyard/winery that makes, after all, one of my all-time favorite red blends: “Symmetry” (from Cabernet Sauvignon, Malbec, Merlot, Petit Verdot & Cabernet Franc) and which consistently is awarded 90 and more points. And then too, many of their other wines are also highly awarded. So, was the wine still good? No, it was VERY good. And with an ARP of $30, it scores as a “value bottle.”

The wine was awarded DOUBLE GOLD at the 2013 San Francisco Wine Competition, but that was five years ago. That this wine held up so precisely since is a strong endorsement not from a critic but from simple fact. On the nose, a basket of black fruit and spice. It’s a lush, rich wine packed with black raspberry, black cherry, blackcurrant, black plum and blueberry. The black cherry fights for dominance in its long finish joined with chocolate and baking spice. But the baking spice had me anyway and just at the nose. So seductive, you can’t help but be drawn in to tasting this Malbec. Not as tannic or rustic as many from the grape’s birthplace (though I still enjoy them), I have to say Strong’s Malbec, at its price point, is also richer and deeper with fruit than many from Mendoza. That all this gets accomplished without losing balance or without becoming jammy is another endorsement. 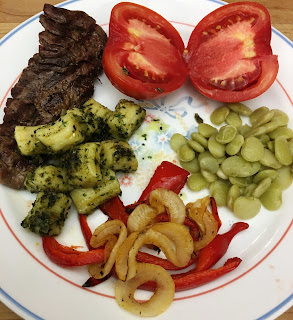 Research conducted, in part, by UC Davis compared the phenolic composition of Malbecs from Mendoza, Argentina and California in the U.S. and concluded there were distinct compositional differences accounting for different tastes in these wines of the same varietal. My first response was “Duh, you think?” I think I got it right, even without the benefit of a study, by saying Strong’s Malbec was less rustic than Cahors while also being less jammy than some from Argentina. Of course, it made me feel good having my palate confirmed by a formal study, and UC Davis has contributed much for the industry; in fact for anyone drinking wine.  But most important here is the lesson learned: If you’ve settled on a varietal from one particular area, keep trying new ones.  Your best friend (other than a corkscrew) in wine education is a willingness to try.

After tasting, I just had to grill some veggies and a skirt steak. Enjoyed it with gnocchi & freshly made basil pesto, garden tomatoes and Lima beans. My only regret? That I don’t have more bottles of Rodney Strong Malbec. Look for current vintages (2013 & 2014 Reserve & and 2015 Dry Creek Valley).   Alc: 15.5%.