The wine was not released until March of 2011.  In May of the same year, Wine Enthusiast reviewed it saying “… bone dry, very tannic and nowhere near ready.”  BUT, that same review awarded the wine 93 points referring to its “Intense flavor of blackberries, black cherries, cassis, cola and herbs mark(ing) this fine ageable wine.”  Tasting ahead is talent.   But tasting back can be a pure joy.

This year, I worked on St. Patrick’s Day (pouring wine) so the corned beef and cabbage was made later.  Then my computer had a snit and then this old critic simply forgot to post the review.  Not everything about being old is a blessing, but tasting this wine, now eleven years post vintage, certainly was.  Rodney Strong is often referred to as “a winery within a winery.”  I heard that reference from people that worked there when I visited in 2011.  And I took that to mean the winery is a huge operation; their labels being available across the whole spectrum of retail outlets and at many on-premise locations.  But within that large production facility is the other winery.  The one making limited production fine wine from selected grapes of single vineyards.  Brothers Ridge Cabernet Sauvignon is that. 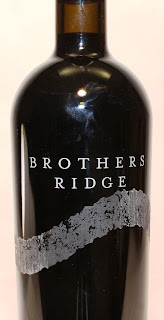 The Brothers Ridge vineyard is toward the northern end of Alexander Valley in Sonoma.  Soils are well drained loam supported by sandstone, fractured shale and ancient greenstone.  Elevations (on some blocks) can exceed 1,000 feet.  Cool breezes keep the vines healthy.  Elevation makes for diurnal temperature drops. But with vines planted on west facing slopes, their grapes absorb the warmth and light of the afternoon sun. The result is a yield of richly developed berries with all the black fruit and chocolate character that makes the varietal so prized.

Rich, deep luscious cassis on the nose with black cherry, accented by black pepper and nutmeg.  Carried onto the palate, the cassis and spices are met with black cherry that has just a hint of sweetness and merged with a subtle hint of vanilla and toasty oak.

The texture is rich and silky.  Tannins are glycerin-like and glide across the palate unobtrusively and in harmony with plummy fruit.  This is a wine of balance, made even better by the phenolic compounds polymerizing with time in the bottle.

If you’re lucky enough to find a 2007 (or have one) I suggest drinking it now.  Although reputed to be drinkable for another 3-4 years, I think it’s time has arrived.  Besides, your own storage conditions (and those in various retail stores) are all different.  Don’t fret, however, over not finding this vintage on the shelves.    Wine Spectator ranked the 2014 vintage at 91 points for Cabernet Sauvignon from Sonoma and 92 points for 2012, each better than 2007.  Wine Advocate ranked as follows: 2015/93.  2014/93. 2013/94 and 2012/93.  Yet, if it’s one thing this old critic has not forgotten, it’s that certain houses working with particular vineyards have a tradition of making quality wine vintage after vintage, and Brothers Ridge Cabernet Sauvignon from Rodney Strong is an example.  Congrats go out to Rick Sayre, David Ramey and Tom Klein for their efforts. 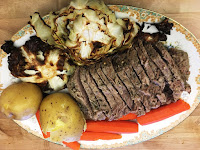 So the time for celebratory corned beef has come and gone and, hopefully, digested without incident. Summer is knocking on season’s door and your grill is on your mind. Fire it up and enjoy this wine with any steak.  It’s perfect for brisket (slow cooked indoors, not BBQ).  And if it’s still too cool outdoors for you, consider this wine with braised short ribs.  It can work with the red meat of duck (though I prefer Pinot Noir) and Lamb (Syrah).  But you can also lighten up with a salad of arugula, grilled radicchio and sliced steak.  It also does well with aged Gouda cheese.