“People like wine with bubbles. It makes the wine come alive.” …. Rick Anderson

Sparkling wine is a large and generic classification of wine that includes wines made from different mandated grapes and in different methods.  So Cremant which is not Champagne is sparkling wine.  So too is Cava and Sekt, as is also sparkling wine whether labeled methode traditionalle or Charmat or Metodo Classico or methode ancestrale.  And there’s more, but what all sparkling wines have in common is a significant amount of carbon dioxide dissolved in the wine until opened, the carbon dioxide then producing fizziness.

Even narrowing it down to just Prosecco is not a “final answer” because that area too has been further delineated. Named a DOC in 1969, the Coneglano Valdobbiadene (KOH-neh-L’YEE’AH-noh, VAHL-dohb-BEE’AH-deh-ne) was promoted to a DOCG in 2009 in the province of Treviso in Veneto (about 30 miles north of Venice in northeastern Italy). It is one of two DOGC areas of production for Prosecco, the other being the smaller Asolo DOGC near the town of Asolo.  The first written reference to Prosecco dates back to 1772. Prosecco has history. And demand for sparkling wines has been growing rapidly in the United States with Prosecco driving the demand. Global sales have been increasing by double-digit percentages since 1998.  It helps, then, to know these classifications and their differences. 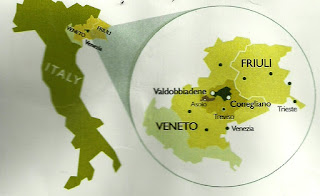 Italy’s highest quality in the Prosecco category. In a move to simplify things, producers from Valdobbiadene have recently tended to skip the mention of “Coneglano” on their front label calling their wine more simply “Valdobbiadene Prosecco Superiore.”  Be assured, it’s the same thing. Prosecco Superiore DOCG comprises 15 hillside towns with numerous small vineyards and takes in 183 wineries. Most Prosecco wine produced will not be identified as Superiore. The Coneglano Valdobbiadene is a smaller area within the expanded “Prosecco Zone” and there vines are grown not on low-lying plains covering the 20,000 hectares (about 49,421 acres) of the expanded zone, but are grown in the smaller and steep hillside area totaling only 6,586 hectares (16,274 acres).  There are other requirements too, regarding “bars of pressure.”  But let me just say that I’ve tasted both wines (Superiore and not) and while both were delicious, you will be able to appreciate the difference on your palate.

It is this area (the DOCG) , after all, that is home to Prosecco; its birthplace. The region benefits from (mostly) stony soils, cooling Adriatic breezes and a moderate climate. The key distinction then is not the grapes used (Glera), but where the grapes are grown. So popular was this Prosecco touristy lubricant that, in 2008, the production area was enlarged to encompass other provinces. The name of the grape was changed to “Glera” (its ancient name) and in 2009, Italy registered “Prosecco” as a protected denomination of origin, barring any other region or country from using the “Prosecco” name.  Coneglano Valdobbiadene situated in the hills between the two towns of Coneglano and Valdobbiadene is the classic zone for Prosecco and thus was elevated to DOGC.  So “Prosecco,” like “Champagne,” is now a protected name.

So yes, there is a difference.  The sunny slopes have a unique micro climate that benefits grape ripening. The high altitudes assure freshness even in the hottest vintages. Constant breezes keep the vines healthy and it is in this environment that many vines are very old, making for concentrated fruit. And to make it even better identified, a system of crus has been introduced into the Conegliano Valdobbiadene DOGC known as Rive. This acknowledgement recognizes the different terroirs of the 43 communes throughout the DOGC.  The name of the Rive is allowed to appear on the label provided yield is below 13 tonnes per hectare (.446 per acre).  Those from the Cru of Cartizze on the steep hills of San Pietro di Barbozza, Santo Stefano and Saccol in the commune of Valdobbiadene, for example, are highly prized. While this, and yes there is more, may seem exhaustive, if you’re familiar with France’s AOC regulations, you should already appreciate the similarity.

Vineyards on the hilly area requires hand picking. Even vine pruning cannot be mechanized because the steep incline cannot be accessed by machine.  But hand harvesting assures better selection. And the steep incline of these hills, with their southern exposure, also assures good water drainage during abundant spring and summer rains.

Prosecco can be Brut (RS of 0-12 g/l), Extra Dry (12-17 g/l) or Dry (17-31g/l) with Brut now being most popular. And it can be Spumante (meaning sparkling) or Frizzante (meaning fizzy) or Tranquillo (meaning still). Spumante may be sub-classified also as Brut, Extra Dry or Dry. And Superiore refers only to Spumante. There are even vintage Proseccos, though it’s unlikely you will find them here. But all Prosecco must be made with a minimum of 85% native Glera grape. 15% may come from indigenous Verdiso, Bianchetta, Perera or Glera Lunga or the international varietals of Chardonnay or Pinot (Bianco, Grigio or Nero).

Unlike Champagne, Prosecco is usually produced using the Charmat method. Usually. There is a “Col Fondo” which is re-fermented in the bottle, but not disgorged, leaving the wine on its lees (like “pet nat”). But, as a rule, Prosecco’s second fermentation is in tank. Yes, it is a less expensive method. And no, it is NOT an inferior technique. In fact, it’s ingenious - for this grape of this terroir. Prosecco is all about freshness, about the fruit.  If you’re committed to a sparkling wine that has pronounced autolytic character, perhaps stick to Champagne (or try a Rive or Col Fondo Prosecco. But for me, there is nothing better than boating on calm water under blue skies with a snack of chilled but previously grilled shrimp, crudité and a glass of Prosecco.  It’s a celebration of freshness and joyous carefree days.

Writing a blog for an international audience is difficult. For some (hopefully not too many) this has gone into too much detail while others will ask why I’ve left so much out.  Let me simplify:  All things green are not grass. All things Prosecco are not DOCG. Look for the DOCG strip on the bottle. It will appear on the neck. Look for the name Conegliano and/or Valdobbiadene. Then look for the term “Superiore” after Prosecco.

Recently, I tasted several wines from this DOCG.  One absolutely blew me away. 100% Glera, it was Valdobbiadene Prosecco Superiore DOCG Brut Rive de Collato 2015 from Borgoluce from vines grown on glacial soil of marl and sandstone. Delicate and elegant. Seashell on the nose, hints of wisteria and acacia. A little autolytic.   Others I tasted offered notes of wet sand, peach, almond, lemon grass and aromas of oyster shell, with clean acidic finishes, or sweet to dry with floral notes, from sour to bright and zesty. But whatever the wine, there was a sense of place to these sparkling wines. A uniqueness my palate understood as excellent…. as “best of class.”  Even better: I understand the latest vintage is expected to be just as good.

If you’re not following Wine Mizer on Facebook, you’re missing out on industry news, mini-wine reviews, food pairing and recipes and fun puzzles.