“Great wine makes wonders and is itself one.”  …. Edward Steinberg

Chardonnay used to be a pretty straightforward wine to make. It still is in France where, depending on where it is grown, it is known by Chablis or a particular chateau in Burgundy for example. Vintages certainly affect the wine, but the style of winemaking remains constant.  In the U.S. where tastes can change the market (remember “Sideways” and Merlot?) Chardonnay has been on a roller coaster with highs of oak and lows of oak chips and curves of stainless steel in an attempt to keep up with consumers’ fickle tastes.  Some U.S. Chardonnay wines have so much vanilla and oak and butter, they could substitute for the meal. Others are so steely it seems the enamel on your teeth will be threatened.  I’m hesitant, even today, to spend good money on an unknown label or without the advice of my knowing retailer.

I don’t know if this condition of confusion gave birth to the “ABC” (Anything but Chardonnay) Club. That would be a shame because even card carrying members of the club have to admit secretly that few wines go better with lobster, certain chicken and other dishes. Can there be no balance?
I received an inaugural bottle of “Dream Walking” 2009 Chardonnay 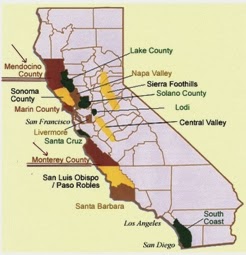 by Cultivate Wines for sampling that answered that question nicely.  “Dream Walking” is 100% Chardonnay, 50% sourced from Mendocino County, 30% from Monterrey and the Santa Lucia Highlands in the Central Coast and the 20% balance from Napa Valley.  I've found a few inexpensive Chardonnays that offered balance in the last few years, and “Dream Walking” belongs in that group.

In the glass, it exhibits the typical characteristic of very pale straw. But it’s the nose that begins the real treat of the senses.  While some may pick up notes of lemon, marzipan and pineapple, I was inhaling a fruit salad of orange segments with pineapple and kiwi.  The wine is a smell/taste pleasure with a strong temptation to keep enjoying its perfume and reward the nose.

This wine is a “Flying Wallenda” of balance: A rich mouthfeel that coats and spreads across the palette offering pineapple, green apple, melon and toasted almond. And yes, it offers vanilla, but elegantly and in balance.  This is a wine of reservation; a motet that has sections played discernibly but without overpowering other sections of the chorus.

I expect such grace in a classic white Burgundy, and I expect 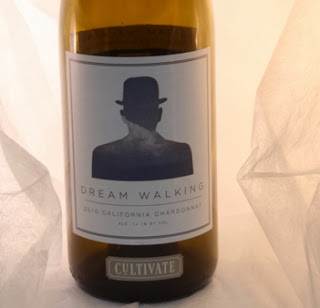 too that I’ll be paying considerably for it. But “Dream Walking” tastes above its suggested retail price of $17.99 and offers “Mizer” value in the balanced finish.  Six percent – just six – of the blend is fermented and aged in 100% new French oak. 36% of the blend is fermented and aged in neutral French oak. The balance of 58% was fermented and aged in stainless steel tanks.  42% (the 6 and 36 percent parts) underwent full malolactic fermentation (the conversion of malic acid to lactic acid. Think of the taste of tart green apple becoming softer and more buttery).  The end result of all this effort is a wine that I appreciate for its multi-part harmonies, the sum being greater than any of its parts.

I enjoyed this wine with a lasagna made from “no boil” noodles* and butternut squash with a béchamel sauce and a simple salad of dressed organic tomato, parsley and cucumber.  But I see it too as a refresher on a beautiful day made for picnics, a backyard accompaniment to freshly made cerviche or spicy Indian vegetable dahl.

I enjoyed the 2009 inaugural vintage and look forward to tasting the 2010 as there will be 8 months of time prior to its release for bottle aging which may add even more layering and depth to the wine.