A Wine For “Everyman”
“Give me books, French wine, fruit, fine weather and a little music played out of doors by somebody I do not know.” ……  ― John Keats
What am I doing starting a piece about Malbec with a quote by John Keats about French wine?  This Malbec is from Argentina.  But Malbec, the grape, originated in France, specifically Cahors, an interior region in the southwest. But after phylloxera devastated Bordeaux’s vineyards in the mid 19th century, Malbec was not widely replanted.  The grape was brought to Argentina, where its growing was tested at different altitudes and the juice subjected to different methods of vinification. Eventually, the modern style of Malbec was born.

Mendoza is the region where “Mountain Door” is grown (see map).   A good name given that it lies at the foothills of the Andes Mountains. Grapes for “Mountain Door” come from two vineyards, the ﻿ ﻿Agostino estate in the Maipu Valley (2800 ft) and the Serafina estate in the Uco Valley (3600 ft).  Both vineyards display glaciated soil of stone and gravel where vines up to 60 years old developed deep roots. Long hang time assures slowly ripened and rich fruit.

Malbec is the grape for “everyman” both in price and popularity.  And that is its blessing and its curse. Exports of Argentinean Malbec have grown from 1.3 million cases in 2003 to 9.1 million cases last year, but sales are almost exclusively retail driven.  You won’t hear Malbec recommended often by sommeliers. It doesn’t have the “geek” factor. And given that good Malbec is available at bargain prices, it’s not a wine that allows for supercalifragilistic restaurant markups.

But retail sales may soon be affected by the inflation scourging Argentina and by a government policy that hurts winemakers.  If you haven’t tried Malbec from Argentina yet, the sound you hear is opportunity knocking.  Many vineyards are struggling to break even, and price increases may be necessary. 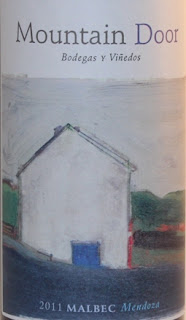 smooth round tannins. It’s easy drinking with fruity notes of cherry and raspberry on the nose. The taste offers hints of ripe plum, raspberry and cherry. The finish is harmonious.  With my first taste of this wine, I was struck immediately by its powerful hint of coffee and cocoa powder.

As with all Malbec, the wine is a perfect companion to grilled steak and other cuts of meat. But my thoughts went first to grilled chicken marinated with a cherry barbeque sauce. Who doesn’t like chocolate and cherry?  It’s also a good companion to wild salmon.

Tech Data
Grapes are fermented for 7 days with daily circulation to extract color and flavor. After pressing, malolactic fermentation is completed. Wine is aged in small, neutral, American oak barrels (30%) and tanks (70%). Wine is developed and clarified. Blending & bottling occurs in the summer following harvest.

*    Malbec was given its own glass by Riedel on April 1, 2013
**  Malbec World Day is April 17, but you needn’t wait until then to enjoy a glass, even if It’s not a Riedel
*** Visit facebook.com/winemizer for mini-tips on wine & food