A MOST SPECIAL WINE

Once not long ago and very nearby, a man who had loved wine passionately since his youth, found himself in new and exciting circumstances.  He could now afford that “dream” bottle he had so long longed for. Although he had been buying wine since attaining legal age (actually even before) the responsibilities he had to his growing family made him shop carefully. Not that doing so was a problem because in doing so, he learned and studied and continued learning about wine.  But now, with his children grown and his obligations diminished, he could actually afford that “dream” bottle.

This was not just a good bottle, or even a very good bottle. It was not a collectible from a famous vineyard and year that was so old it was now undrinkable.  It was not a bottle from Thomas Jefferson’s collection of imported wines.  It was not history.  No, this was drinkable wine.  Wine he always dreamed of tasting. Wine made from the smallest percentage of the best vineyard’s finest grapes and from an exceptional year. This wine was a testimony to both the terroir and to the winemaker’s art.  It was made from free run juice, aged in 100% French Oak barrels.  This was, to him, the holy grail of wine. It cost more than almost anyone would understand, but he had wanted this wine, to taste this wine, the whole of his life 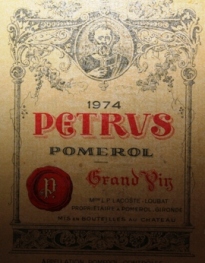 So after buying the bottle, it enjoyed the most prominent place in his cellar. This was not a wine to be enjoyed alone. He always knew that.  Good wine is only made better when shared. Of course, it would need to be enjoyed with another oenophile.  And it would need to be decanted, so time and planning for the event would be necessary. And it couldn't be drunk on just any day. No, this was definitely special occasion wine. But what occasion?

During the year, friends visited and he always offered a bottle or two.  He had several. He had many excellent wines. After all, his many years learning and studying and collecting provided him an excellent collection from which to choose.  But no day seemed special enough. He had, after all, only one bottle of this “dream” wine.  It could age.  It would get better. And he had other bottles. Excellent bottles.

One year became two.  He often thought about the wine, but that special day hadn’t presented itself yet. He would know when. And he enjoyed looking at the bottle when he visited the cellar.  Once he drank it, the magic would be gone.  He wouldn’t have the pleasure of looking forward to it anymore. This way, he also had the enjoyment of anticipation.  But he would drink it soon. He knew that really. It was just a question of when.

New Year’s Day was special for many, but not for him. Why waste such a special wine when people have often dulled their senses with overindulgence in cocktails?  No, this wine had to be planned for. Arranged. Anticipated seriously and with respect.  It couldn't be a birthday. Birthdays always involved many people. Some liked only white wine. Some didn't enjoy wine at all.  And cake? No way did he intend to pollute this rare and treasurable wine with the sugary taste of frosting. No, birthdays were no good.  He would think about this some more.

And then, he died.

Email ThisBlogThis!Share to TwitterShare to FacebookShare to Pinterest
Labels: General